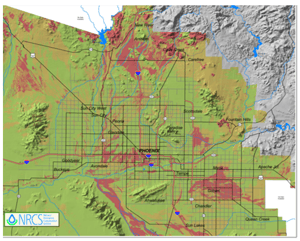 Many years ago, I was discussing with David (Deatherage of Copperstate Engineering) the foundation heave problems that we were encountering. He related to me an experience that he had with an environmental remediation. He was removing chemical contaminants in the soil that happened to be below a commercial building. The methodology called for active soil depressurization techniques (i.e. venting to force the chemicals to one end, where they could be collected and disposed of). This technique also removed the water as a byproduct of the process. This building happened to be on top of expansive clay soils  (expansive soils are soils that absorb water and increase in volume; the more water that is absorbed, the more the volume will increase) and eventually experienced some settlement. We reasoned that we could try to use this process in a controlled manner with expansive clay soils.

We actually experimented on a house in Chandler that had a severe floor slab heave several years ago. We hooked up a huge commercial vacuum to some 4 inch PVC pipes and connected them to a hole that we cored in the slab. We also drilled holes in the stem wall at the level of the ABC around the perimeter of the house. Very similar to the drawings for The MoistureLevel Smart Foundation System. We measured the humidity of the air going in and coming out and determined moisture was being removed from the soil.

The system was noisy, bulky, and expensive, so we reasoned that it could not be left at the house on a permanent basis. We began to think that we could leave it there for some period of time but we were concerned about returning moisture levels in the future. As happens in life, we got busy with other things and did not pay much attention to this for quite a while. The economy fell apart and we all became focused on basically surviving.

Fast-forward a few years...  I was in Omaha receiving training from our supplier, Foundation Supportworks. I overheard several contractors discussing how they remediate Radon. And low and behold it was very similar to my experiments all those years ago! 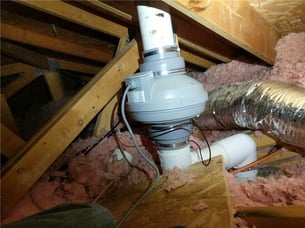 However, with off the-shelf technology and lower costs it became feasible to leave the system on-site permanently removing the issues of returning moisture. The gears now turned in my head very quickly. I immediately called Dave up again and re-discussed with him. We decided to install some systems using these off-the-shelf components and some feedback mechanisms to control the moisture content.

The rest as they say is history. We have now installed The MoistureLevel Smart Foundation System on over 500 homes with an average of three to five per week now being installed. We are closely monitoring these homes. The very first one that we installed showed a dramatic drop in the heave of over ½ inch in a six-week period of time. I was astounded. I never expected such good results in such a short period of time. I have shared now with the geotechnical engineering community and received an overwhelmingly positive and supportive response.

If you believe your home may be showing signs of foundation heave, we would be happy to come take a look.  Initial inspections are always free for Homeowners!