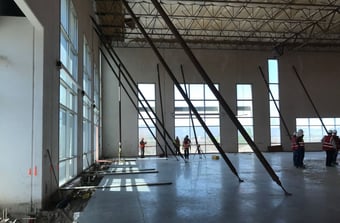 In my last blog, I described the state of the building when we first encountered it. To review the previous blog entry, click HERE.

In looking at the building, it became immediately apparent that action was needed ASAP. Some of the structure was in danger of structural failure. The joists were becoming disconnected from the girders. Some of the joist and girder connections to the pockets in the walls were losing their connections as well. The ledger around the perimeter at the inside top was broken in several places and was losing its integrity.

We immediately shored up the roof with shoring jacks on the interior and the tilt up walls with shoring jacks. After install several test piles and other exploratory work, we started immediately shoring the lowest portion of the building that had the most movement… the south east corner. Because of the immediate need to provide support, we installed a few piles and then went back and filled the piles with grout and slightly raised the building to transfer the load to the piles. This slowed our process down considerably, however because of the continuing movement of the building, was necessary.

Because the building was unoccupied, we elected to work on both the inside and outside staggering the piles to avoid eccentric loading conditions on the portion of the building that was level with the outside grade. In the dock area where the footing stepped down, we chose not to do inside piles as they would have been at the bottom of a 10-foot-deep hole, creating safety and logistic problems.

…and so the work began in earnest! For some reason, the landscaper felt the landscape life was more important than the building structure; they kept coming to the site in off hours to turn the irrigation back on.  This filled up our excavations and put the building in further jeopardy… until we finally cut the source line physically.

The irrigation problem was solved, but we had another strange thing happen… when the holes were filled up with water from the inadvertent irrigation, some holes (over 100 feet away) started to fill up, indicating some sort of weird underground connection to them.

Another mystery… one of many to come!