Repairing a previous Stem Wall Repair is More Common than Homeowners may Realize.

A couple of weeks ago, we were called by the largest structural engineering firm in Phoenix to help a homeowner who had previous repairs on the stem wall of their house. Repairs were done less than two years ago and were already failing. Why is this happening on a regular basis? We often see repairs done by contractors to repair the horizontal crack around the perimeter of the house known as the stem wall fail on a regular basis. I have seen a number of ideas tried such as injecting the cracks with epoxy or repairing the concrete using fiberglass reinforced repair mortar or other polymers. All of these approaches will ultimately fail in a short amount of time because they do not get at the root of the problem. 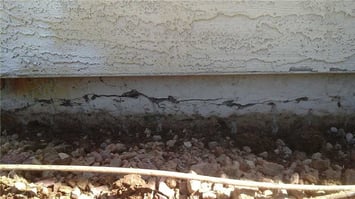 This rusting is caused from tiny electrochemical currents inside of the concrete called a chloride ion migration. As long as this tiny electrochemical current is in place the rusting of the rebar will continue. As rebar rusts (oxidizes) it grows in volume since iron oxide is weaker yet takes more volume than iron. As the iron oxide grows it continues to put pressure on the concrete causing it to crack. This problem is exacerbated as concrete gets older and changes from an alkali base to an acidic base. There are many ways to deal with this chloride ion migration. Some methods use tiny reversal electrical currents.

Hire a Concrete Repair Expert that Understands the Role of Rust in a Stem Wall Repair.

The International Concrete Repair Institute outlines industry accepted methods that involve removal of concrete to fractured rock, sandblasting the rebar to white metal, coating with ion blocking epoxy, and using an anodic based repair mortar. There are other repair techniques that are effective as well. When our inspectors come to your home and inspect issues like these, know that they will be recommending methods to get at the root of the problem.