The project I am going to highlight here has a long history of mistakes going back many years. Many parts are muddy and unclear.

The first part of this is shrouded in the fog of time. The property has changed hands 5 or 6 time in the last 15 or so years. Apparently,  underpinning was done many years ago… it is not clear where this work was done. Then in 2013 we evaluated and the site with salesmen only with no engineering oversight and came up with the following plan:

At first glance, this plan seems plausible. This house was 6” out of level. Jacked up bad. Apparently, it was not lifted. We are not sure but apparently mudjacking was done but we are not really sure where. Unfortunately, none of the people involved in this project are around and the records are sparse.

Fast forward to 2017. The site was visited by one of our sales consultants. The property had changed hands and a house flipper was looking for quick and dirty solutions. During the intervening time, remodeling was done including floor leveling compounds, muddying the waters further. The owner did not elect to have the property evaluated by our engineering team. Instead a few band aid repairs were made with crack stitching, poly injection, MoistureLevel and piering at some outside columns. 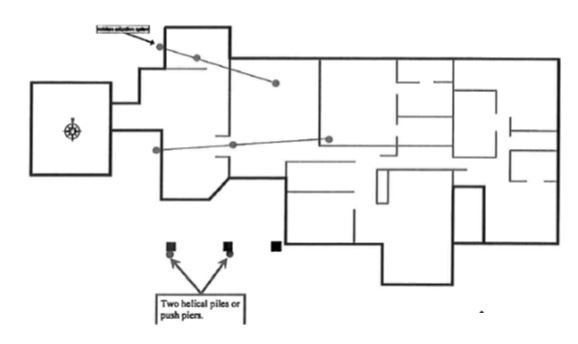 Apparently the South MoistureLevel Smart Foundation System was installed however the north was elected to be not installed.

Fast forward a few more years. The floors in the home were performing poorly. A new owner wanted to know what could be done. This time Engineering services were engaged and revealed a whole new side that was never understood before. An investigation revealed the existence of other reports by licensed professional engineers, complete with borings and analysis.

After extensive analysis here is what was revealed.

We believe that the low point at the top of the blue line was the result of an erroneous high read on the 2013 read making the subtractive read seem low. This subtractive read shows over the 6 years that the north middle of the home has moved up or that the other areas have moved down. The high area is suspiciously close to the area that was mud jacked…. That that was done before the reading. So perhaps some of that could have been the result of mud jacking.

Other reports show a very unusual soil profile. There is a deep clay layer in the front of the house… but at the back of the house, the clay is near the surface making the north side extremely susceptible to heave. That differential creates a huge problem for the floors. Unfortunately, the previous MoistureLevel Smart Foundation System was never installed there. Fortunately the system could still be installed there.

What are the lessons learned here? First and most obvious was that there is no substitute for professional engineering analysis. Several times in the past, lay people with out the benefit of formal engineering education did not understand a complex situation. Another lesson is that sometimes you need more information that what can be gathered in a typical investigation. At times you simply need additional resources.