The Hardest Job of My Life: Part 7 - The Conclusion

"After many months of very hard work the project was completed. This was a marathon of work. Hard physical work..."

Finally all of the areas of the house that we were hired to level were essentially leveled. We had finally reached the REAL summit!

During the course  of work a long time elapsed….. from March until September. Right through the middle of Monsoon season. There were trenches dug around the area of excavation that filled up with water each time it rained. To minimize this we lined them with plastic and pumped them out after rains. I was not worried about the accumulation of water in them affecting the clays under the house for several reasons:

The trench was deeper on the south side, keeping water away from the north side and was pumped regularly. Water usually travels through pure clay very slowly… about 3 inches per year, and there are very little mechanisms to facilitate moisture transmission to the north end of the house. The 4 mechanisms that originally facilitate transmission were for the most part no longer in effect:

As mentioned in the last blog we did experience an area adjacent to the end of the trench by the front door. The opposite adjacent area was protected by a large covered patio area. So most of my logic above bore itself out as correct.

Once we dug out any areas of the trench that were soft or muddy we then backfilled and compacted the soil. Once the dirt reached about 4 inches below the bottom of the post tensioned foundation, we then put cement board all around the perimeter to prevent the soil from entering back in under the house and maintain the gap we created. Once the cement board was competed, we then sealed the perimeter with very thick HDPE liner sealed to the house. 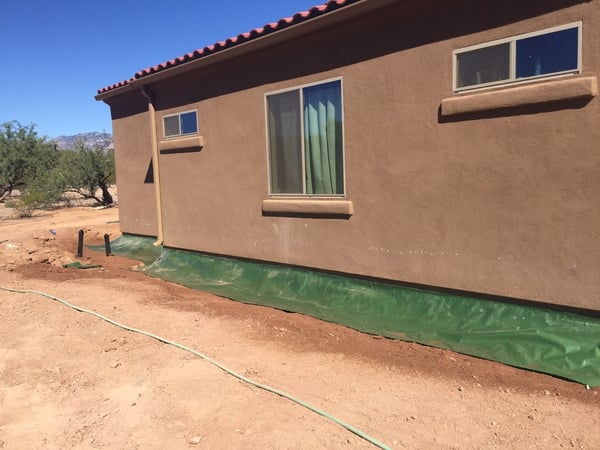 View of the house with the liner installed over the top of the cement board and ready to finish backfilling and compacting.

After many months of very hard work the project was completed. This was a marathon of work. Hard physical work…… with many false summits. I learned many lessons on this project. Out adversity and the refiner’s fire, pure gold can emerge. Stay tuned for the summary of those lessons.