The Hardest Job of My life: Part 6

Leaving the jobsite and returning to Phoenix leaving clear instructions on what was to be done, I felt good about our ability to finish up. After a few days of work by our crews, we again took floor level readings. To my disappointment, they were not quite what we were expecting. They were within Industry tolerances, but not enough to feel good about leaving in that condition.

I returned to investigate…

The areas that I wanted to excavate were not reached with the extensions on the high pressure sprayer and high pressure air from the tunnel that we built. It decided that more tunnels were needed, they were dug from the east and south walls. 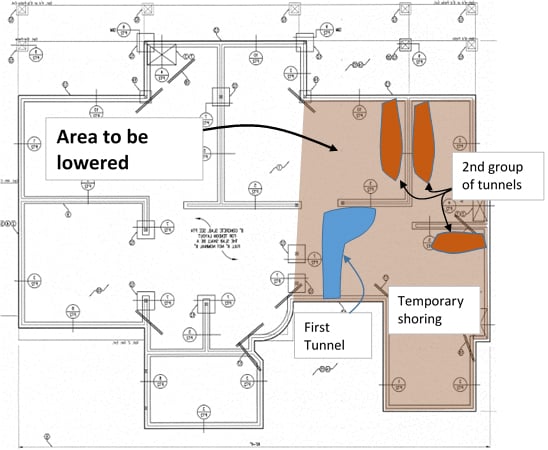 We found that the repeated blowing of debris, from different sides and angles, was refilling the areas under and beside the grade beams. The additional tunnels allowed us to access these grade beams at a closer distance to ensure that as we cleaned one out and we were not refilling the other.

We had a break through…

Was this really true or another false summit? We cleared out all of the areas that was stopping us from lowing those pesky areas in the middle. The crew took more reading… We finally made it! I instructed our team to  install the grout socks to support the slab on its interior. 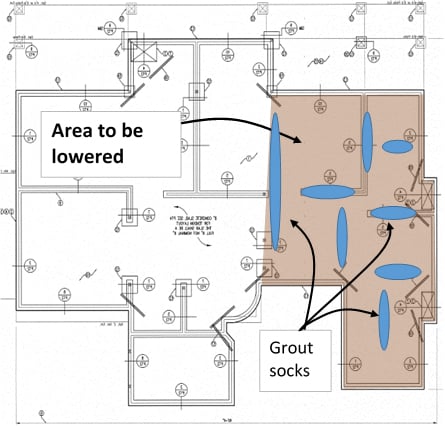 After the grout socks were installed, we realize that the front doors were not out of level and not functioning properly. We thought that the installation of the grout socks caused a inadvertent lift.  Once again I returned to solve the mystery. 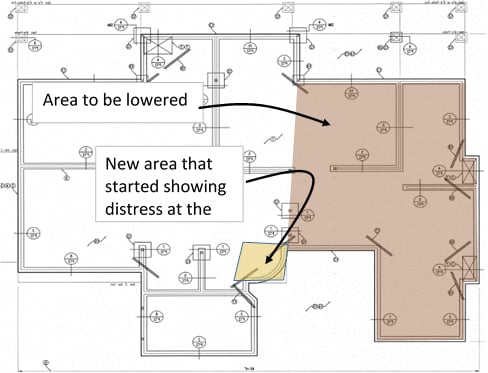 After returning I discovered that the trench near the front door had moisture added to it by the nearby gutter drain leaking into it. As a result the area adjacent to the trench heaved up dramatically causing the front door to become out of level.

As a result, we returned on our own time one more time and under excavate this area to relieve the pressure. With this small adjustment, we were finally done with the leveling…. The REAL summit!

All that was required was the installation of the moisture barrier and the backfill.