The Hardest Job of My Life: Part 4

We began the deep under excavation in June after the helical piles were installed and the mechanical under-excavation was done around the perimeter.

The under-excavation work is done with compressed air, and vacuums. The work started to take a little longer than usual, we realized that the soil under the slab was not ABC but very hard clay. We have run into this before where there was less ABC but the impact had not settled in yet.

This job was different than previous excavations in that instead of corners and edges, the uplifted areas was the entire south portion of the home. There was a larger footprint than usual resulting in a very large area to penetrate underneath. We used up the time in our schedule and needed to move on to previously scheduled jobs. The decision was made to leave a non-foreman behind with 5 temporary workers, who continued the air knifing with compressed air. After several weeks they reported success.

They did succeed in pushing the compressed air and soil across the 50 foot wide slab, but it was only in a small area. This was the first of many false summits. When exhausted from hiking you reach the top of what you think is the top of the peak, only to discover that it is only a false summit. In our line of work there can be many false summits, each one more exasperating than the last.

We soon realized that there were grade beams that attached to the bottom of the 8”thick post tensioned slab. These prevented us from being able to blow the soil across. At this point we had already mobilized the next part of the operation, the grout socks and The MoistureLevel Smart Foundation System. As we took the floor readings it was clear that we had not succeeded in lowering the slab. 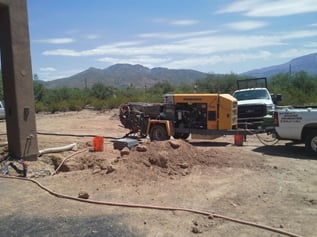 We demobilized everything and took time to rethink this foundation repair plan strategy.

We started to appreciate the difficulty and devised a plan to use sand blasting equipment. This was followed with trying to use high pressure water and also modified rock drills. We made time in our schedule to send our Foreman back out armed with this new plan.

After several more weeks of this and taking the elevations of the floor slab, we noted incremental improvement - but it wasn’t enough. At this point I started to get personally involved on the job site to help troubleshoot and make progress. Our strategy was to find the grade beam and excavate under it. Again we thought we were making progress but it was another false summit.

After much thought and sleepless nights, we decided that the current approach was not working. We were concerned all along about worker safety and avoiding being underneath and having workers crushed if the house suddenly lowered while they were  excavating. This prevented us from effectively getting between the grade beams as we were trying to reach these areas from the edge with long extensions on our equipment.

Thinking it through for about the 10th time we finally decided to create safe zone tunnels 3 foot deep from the edge to the center of the slab where the grade beams were. The depth of the tunnels would protect us (notice I included myself at this point) from any sudden lowering of the slab. These were dug with a chipping hammer and spade bits… and a lot of very hard work. We also installed temporary shoring back far under the slab.

Have a foundation repair question or comment?  Drop it into the comments below!