The Hardest Job of My Life: Part 3

The project began in earnest at the end of May, which was ideal as the Sonoran Desert heat had not settles in for the summer just yet.  One of our top production foremen, David Ortiz, was assigned to lead this foundation repair project.

This foundation repair was a little more difficult than usual, however it was at the time not fully appreciated.

We started as we usually do by excavating a trench around the perimeter of the area to be lowered, followed by installing helical piles. This work took several weeks and at that point nothing unusual was really understood.

David Ortiz excavating the trench around the perimeter 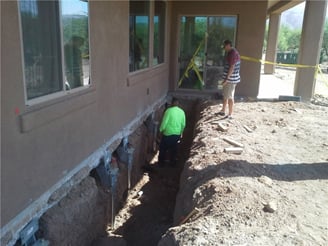 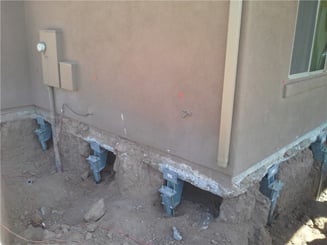 Installation of the perimeter helical piles

The next step was to begin the under excavation. Under excavation involves removing soil or the ABC layer beneath the foundation. The initial under excavation is usually done mechanically with a commercial excavator, chipping hammers a few shovels and a whole lot of good, old fashioned elbow grease. This foundation repair was a little more difficult than usual, however it was at the time not fully appreciated. 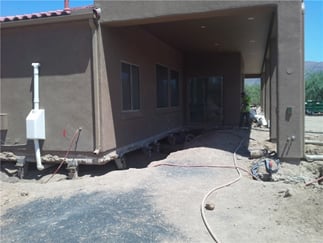 Initial under excavation with mechanical means

We discovered quickly that we were not moving as much ground as we had intended (pun intended).

Once the initial under excavation was completed with mechanical means, we initiated the deeper under excavation using compressed air tools and trailer/truck mounted vacuums to extract the soil. Again, at first this situation was difficult but the magnitude was not fully appreciated. As we got further underneath the excavation process slowed down considerably. We discovered quickly that we were not moving as much ground as we had intended (pun intended).

Check out the next installment in this series!  Click HERE to read part 4.

Have a Foundation Repair question or comment?  I want to hear from you!  Drop me a line or pose a question below.