AZFS Obtains PTI Certification... And Are the ONLY Foundation Repair Contractor in the state to have this certification.

We receive an increasing amount of calls from homeowners that have post tensioned foundations. Over the last few years, the frequency of those calls has continued to increase. To insure we are doing the right thing for our customers, we decided that we needed to be better informed.

Last June, four of our leadership traveled to Austin, Texas to receive training and pass and exam to become Level 1 Certified from the Post Tensioning Institute. Our principal Engineer, John Ciminski, Director of Engineering Services, Mike Miller, our Operations Manager, Tom Dixon, and myself. In order to receive the certification, candidates are required to attend a 2 day seminar and pass an exam with a 70% score or better.

This training and certification better equip us to understand the problems we encounter better as well as insuring that we recommend the correct methods to fix, and that our field crews are trained. As you might imagine, safety plays a big part in all of this.

Post tensioned foundations here in Arizona, are of the uniform thickness type… meaning instead of ribs with cables top and bottom of the ribs (like a waffle)……instead a thicker slab is poured and cables are stretched both ways (north and south as well as east/west). After the concrete is placed, and partially cured, the cables are tensioned usually to around 33,000 pounds. Over time the tensions relaxes to around 28,000 lbs. This has the effect of compressing the concrete making it stiffer, and any cracks that form, should be compressed and less likely to open up. 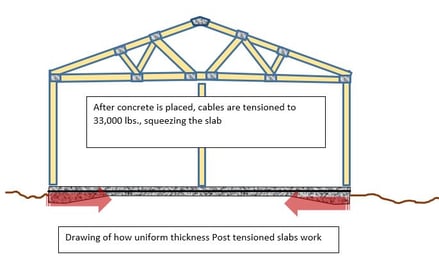 It does not make it immune to moving up and down from soil movement. In fact since there is usually no edge protection in the soil (like a footing a stem wall that go 2-3 feet into the ground)  it can be susceptible to moisture related soil movement. Even though the slab is stiffer than a non-post tensioned slab, it cannot resist the powerful pressures of soil movement. I have seen post tensioned slabs move up to 9 inches from heaving soil.

One of the common problems with a Post Tensioned Foundations is corrosion. Modern cables are wrapped and sealed with grease and plastic coating. Theoretically, if the soils have higher amounts of chlorides or sulfates, then the cable ends that typically don’t have the grease and plastic sheathing, are encapsulated with a plastic part. Many times in the past it was not done and sometimes it is impossible to seal out all moisture. Accordingly the ends that are more exposed to moisture can rust and cause problems with expansion and cracking of the concrete, and possibly even breakage and failure. Sometimes embedded rebar has rusting problems similar to what I have discussed in previous blogs………….    But with post tensioning care must be taken not to disturb the concrete in front of the stressing plate since it likely has 28,000 lbs of force behind it. At least not without distressing the cables first.

We have on occasion come behind plumbers who have removed the concrete to repair plumbing. Concrete that is being compressed with 28,000 lbs of force…… causing the concrete to collapse inward.

Sometimes, we see problems with cold joints in the concrete or other concrete placement problems that can be exacerbated with the tension on the cables.

Suffice it to say, these repairs should not be undertaken by those that are not trained in post tensioning.