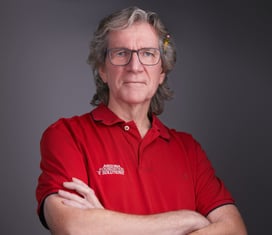 Sales and engineering competencies are different.

They need to be separated.

It’s amazing how different the past looks going forward in time when looking back at it through a different lens. I posted 2 blogs on the history of our company. Now I look back on it with some different thoughts.

I started Arizona Repair Masons in 1988. During that time, I started doing mud jacking as an alternative to concrete replacement. Soon after that, (around 2000) Ram Jack contacted me to become a dealer for them as their local installer. I really didn’t know much about underpinning or how to evaluate structures for soil caused movement. So I took my que from them. I remember them giving me a funky proprietary Ram Jack branded water level, and pretty much told me to install piers where there were low areas and cracks. There was no discussion of foundation heave.

Fast forward to 2013 when I quit being a Ram Jack Dealer and signed on with Foundation Supportworks. The training from Supportworks was light years ahead of anything I had experienced before. Yet still no discussion of expansive soil heave…. Except to explain bowing basement walls.

I always felt that there were problems with the typical industry standard model of doing business:

This is what the industry refers to as a “one call close”…. Similar to the way a siding contractor operates.

I felt uncomfortable with this. At first, I could not put a finger on what exactly the problem with the process was. I knew that if the salesman wanted to, he could take advantage of the homeowner if he wanted to…. And since he was getting paid a commission… it could happen more often. I experienced this a few times and put a stop to it in my very early days with one of my sales guys that was less than honest. But more than this, I soon realized that his was a much more complex process than I was led to believe if it was to be done correctly.

If you keep the Customer’s best interests in the forefront, good things follow.

I remember going to lunch with many local engineers in those days and asking many questions about how to determine the difference between settlement and heave. I picked up more and more information and soon became a student from every source I could get, as I saw the complexity of the matter increase.

I remember hearing fellow contractors from across the country say to each other….” I have a great sales guy, but he is a wreck technically... every job he does requires me to send a more technical competent guy behind him to clean it up” and another would say…” I have a really technically competent guy, but he cannot sell anything” … I soon realized that sales and engineering competencies are different. Different abilities and skill sets. They need to be separated.

Problem was there was no one doing it. There was no model to emulate. So we just started trying it out like a giant R&D project. At first, we ran into delivery problems followed by quality control, training, in addition to finding, adopting and developing a set of rules that would be objective and consensus accepted. But slowly over a 6 year period of time, we ironed out the kinks in the process. Along the way we have developed our own proprietary software to streamline the process and provide checks and balances to insure everything is done and that nothing is left unobserved.

These 6 years of development was a difficult time. It was hard to make the model work in a profitable way. We in fact were told by every foundation repair contractor we met, including our own supplier that the model was unsustainable and would never be profitable.

We knew that in the end, if was right for the customer, that it would be proven out. With grit and determination, we drove the process and hung in there. Today the process runs like a well-oiled machine with our software. More importantly customers now have an expectation that the analysis and recommendations will be done with a licensed design professional.

Our competition struggles to deal with those customer expectations and some have shifted to imitate our processes. In addition, now we have other contractors from around the country coming to learn our processes in order to apply it in their businesses. Proof that in the end, if you keep the customer’s best interests in the forefront, good things follow.

Read the first Installment in this series - How I Got to Where I Am: Humble Beginnings of a Foundation Repair Expert – by clicking HERE.

Read the second installment in this series - Part II: How I Got to Where I Am Now…..& Where We Are Headed Next! - by clicking HERE.

We want to hear from YOU!  Leave your questions and comments below.