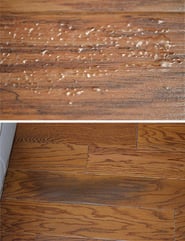 Vapor transmission with slabs on grade is a vexing problem the foundation repair industry has struggled with for decades. Millions of dollars of damage has occurred as adhesives fail, coatings de-bond from hydrostatic pressure, and sometimes so much water has been coming through that standing water can be observed in the surface of the concrete! This moisture transmission through slabs also promotes ASR or alkali silica reaction, a common problem here in the Southwest and other areas of the country where the aggregates have high silica content that reacts with the alkali of the cement. This produces a gooey substance that forces its way to the top of the slab and in many cases breaks up the slab from internal forces. Phoenix Sky Harbor International Airport is a victim of such a phenomenon.

"Most solutions to this problem involve installing sealers on the surface of the concrete. This is problematic at best"

Concrete is poured within excess of water (typically called water of convenience) does not bind with the cement particles. This excess water takes many years to remove itself. In addition, there are number of mechanisms that bring water under the slab. One such mechanism is clay suction from around the perimeter of a foundation. I document that more fully in my previous blog https://www.foundationaz.com/moisture-accumulation and In addition through the “stack effect”, water vapor along with other gases is pulled in from around the perimeter of a structure to replace gases that are transmitted up through the foundation into the structure and by heat convection drawn up into the attic. This is a well-documented process for one of those gases, deadly radon.

Particularly here in the arid Southwest, air-conditioning dries the surface of the slab promoting vapor transmission as well as condensation of water vapor as it is pulled through the slab. As water condenses, the pH level is usually around seven, which can promote dissolution and attacking of cement particles causing greater voids in the concrete thus exacerbating the problem. Once this process has begun de-bonding, most surface treatments becomes more problematic over time.

Most solutions to this problem involve installing sealers on the surface of the concrete. This is problematic at best for the following reasons:

The problem here in the Southwest is exacerbated by the reluctance of installers to install a vapor barrier under the slab. Because of the arid, hot curing conditions, placing a vapor barrier underneath a slab promotes extreme slab curling due to the difference of evaporation on the sealed bottom versus the open top.

Please see my previous blog, https://www.foundationaz.com/blog/using-sub-slab-depressurization-to-mitigate-vapor-transmissions, to learn how the MoistureLevel system revolutionizes treatment of these problems.