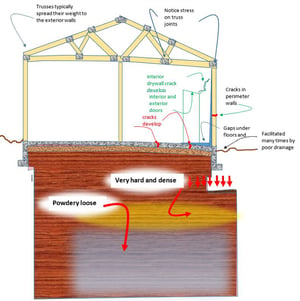 In examining our mistakes, we engage in feedback that makes us better, smarter and it allows us to operate with fewer mistakes in the future. Rather than hide mistakes and pretend they don’t exist, we feel it is better to air them openly so that we call all learn from them.

We had a house in North Scottsdale that we first underpinned many years ago. A few years after we completed the original work, we returned to at the Homeowener’s request to address poor performance of the foundation repair solution. In revaluating the foundation problem, we tried to understand the reason for the poor performance; ultimately, we did not get to the bottom of it at that time.

Fast forward a few years and the problem again resurfaced - with even more poor performance. This time I vowed to dig (literally) until I found the root cause of the foundation failure. I hired an outside forensic geotechnical engineer to do an independent study. I met several times with the owner on site, and spent considerable time trying to understand what went wrong and how to best help this Homeowner.

This house had hydraulic push piers, helical piers and compaction grouting installed. All the products were installed with the proper force and driven to refusal. Hmmm… based on recommendations of the forensic specialist, we returned to the site to do some drilling and learn more about the soil there, under the house’s foundation.

Based on the drilling, we learned of a very rare subsurface condition that fooled us into thinking that our piers and grout installations were in load bearing strata. There was a hard layer of very dense soil at about 9 feet deep. It was dense enough to refuse all of our driven products at that 9 foot depth. That layer was a few feet thick and under that layer was a very soft powdery soil that when wetted completely collapsed. Somehow, water found a way to the deeper soft layer. As it did so, it weakened the harder material above it and subsequently all of our piers and grout that we embedded into it.

This scenario is often cited as to why piles should have soil investigations prior to their design. I respectfully disagree. Even though it would have helped avoid failure in this case, it is the only case like this we have encountered in 20+ years of installations. There is no such thing as no risk; even investigative soil borings present incomplete information that carries risk.

The best course of action requires thoughtfulness and contemplation balancing risks and costs… knowing that not every risk can be completely eliminated. Treating rare isolated instances with blanket protocols is not balancing those risks and costs that ultimately flow to the homeowner properly.  EC 027 from IAPMO essentially agrees with this logic.

Sometimes, unknowns can rear their ugly heads and cause problems for all of us. The best we can do is understand them the best that we can and react accordingly….. and not overreact.