"Sometimes it takes getting hit between the eyes with a two by four to realize when we need to learn something!”

We met with a customer in Mesa many years ago, we completed a thorough  analysis, and developed a repair plan based on that analysis.

Check out the topological survey and damage map: 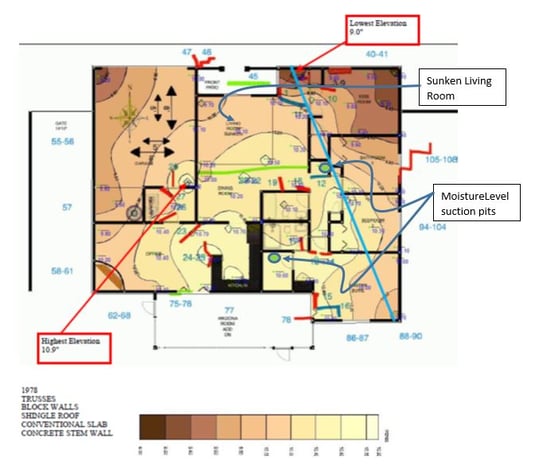 The customers main concern was the crack in the floor. This is shown as the green line in the middle of the home running east and west. When coupled with the majority of the damage (red lines denoting wall cracks) mostly at the back of the home in the high areas, we interpreted this as a heave.

Almost always cracks in slabs signal to us heaving since there is very little weight bearing down on the slab as trusses distribute the roof loads to the perimeter. In addition some crucial signs of stress were missed by the onsite tech …..near the low area at the front door. As a result the plan almost exclusively was focused on mitigating the heave with the MoistureLevel® system.

Later we returned to the to complete a topo reread. 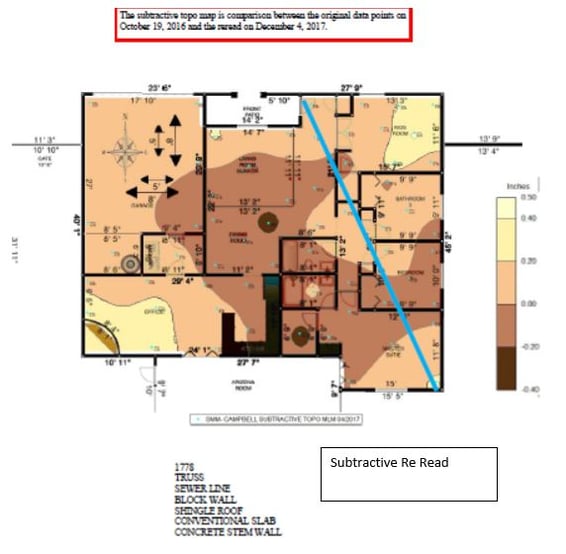 We were thrilled with the results! The high areas were now showing much lower (darker). This is a typical good result from the action of the MoistureLevel® system. However the homeowner was not happy. Why? Because the main concern….. the crack in the middle was continuing to worsen. Hmmm…. What gives?

After doing some more analysis, we discovered that the low areas in front … the signs of stress that were missed combined with the low readings were really indicating settlement were continuing to settle and required underpinning to stop the movement. Normally perimeter footing movement could never result in cracks near the center of the home. 4” unreinforced  concrete could never span 18 feet. Meaning if it were pushed down on the edge, it would show a crack  and buckle 4 or 5 feet from that location…. Not 18 feet away. Normally. This coincidentally is the explanation given by “ foundation experts” here in Phoenix every time there are sign of stress in the middle of a home. A ridiculous claim normally…. normally.

In this particular case, the home has a sunken living room that runs from the front door to the crack in question. This concrete was placed monolithically…. Meaning all in one pour of concrete. As a result the slab at this area had a mini wall stepping down to the sunken area. This mini wall “reinforced slab” has the end result of significantly adding rigidity to the slab over that area….. easily acting as a cantilever forcing the center up with the fulcrum in the middle area.

We missed this opportunity on our first attempt. We did address this properly on our return visit with more data. The customer was not happy with us and coupled with the fact that we were slow to respond to them, wrote a review that reflected their dissatisfaction. When I met with them, they apologized… and I responded with “sometimes it takes getting hit between the eyes with a two by four to realize when we need to learn something”…. iterative learning…. by means of a two by four between the eyes!