Iteration leads to improvement if the feedback is utilized! 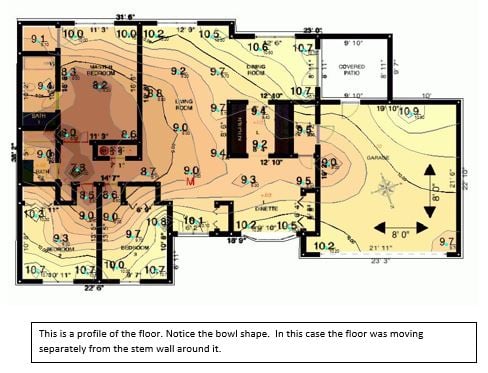 In a previous blog, I discussed how we have learned over the years from mistakes we have made. In this blog, we are going to take a look at another learning opportunity we had.

We came across a home in Flagstaff that had some foundation issues. Most of the distress was in the interior walls…. meaning that the floor was moving more than the perimeter footings. It is common practice in Flagstaff for builders to construct the footing and stem and then fill inside of it up to the sub slab level with locally obtained cinder rock. It is not unusual for those cinders to break down and consolidate over time that is usually manifested with a low spot in the middle of the home such as this this one.

In this case, we had reports from 3 local registered engineers that matched what we were saying. This was a slam dunk case, right? Grout the cinders down to the native and raise up the middle of the slab where it was low. This was done as per plan.

12 Months later the customer called and reported new damage on the interior of the home. A subsequent investigation showed that the native soil which was un addressed in the repair plan was a highly expansive clay. In the winter the snow melted slowly and cause the clays to expand. In the Summer the large pine trees near the house perimeter sucked out all the moisture that had accumulated during the winter.

The result was a bi annual cycle between summer and winter that resulted the slab being high in the winter and low in the summer. The cycling was creating the distress in the interior walls.

Sometimes, just because you know the answer to a problem, it does not mean that there are not other problems that don’t also need to be addressed. In this particular case, the underlying cycling clays was another problem (in addition to the  original issue of consolidating cinder fill).