"Running a business is hard. Especially as it transitions from a small 'mom and pop' operation where the owner directly oversees everyone work to a business that relies on the work of others requiring a delicate balance of oversight, trust, motivation, and systems to control and orient the combined efforts." 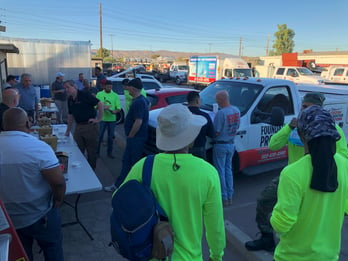 Over the years we here at Arizona Foundation Solutions have done a lot of things right. We have also made mistakes that we have learned from. I am struck by how strong today’s culture seems to discourage us from admitting our biases and learning from mistakes large and small. We all seem to understand that feedback makes us smarter, yet it seems that the embarrassment of being wrong keeps us from utilizing that feedback since internalizing it requires admission…… the first step  of any meaningful change and ultimate improvement.

When I first started analyzing and repairing foundations, I simply followed the practice of the time…. Letting salesmen diagnose and recommend on the spot in the “one call close”. It felt uncomfortable, and soon I figured out why and gradually made changes that evolved into our system that we utilize today that separates the sales and engineering functions. I have written extensively on why that is so important (click here to learn more about proper inspections).

Over the years, we have made modifications to our system as we took in feedback to make improvements.  I would like to write a series of blogs that highlight some of the learning opportunities that helped us get to where we are today. This will be a humbling series and I will let myself be vulnerable in order share the valuable lessons learned for everyone to benefit from. I will keep the identities of others private although some may be able to figure out some of the more prominent projects. I really don’t want to highlight the mistakes of others…. Of which many were that largest contributing factors. Instead I intend to focus on what we have learned from our own actions and thoughts.

Running a business is hard. Especially as it transitions from a small 'mom and pop' operation where the owner directly oversees everyone work to a business that relies on the work of others requiring a delicate balance of oversight, trust, motivation, and systems to control and orient the combined efforts. Leadership ultimately accepts all the responsibility and learns how to lead, motivate, train, organize and systemize better. Having very little experience working in other companies, I may have missed out on how other companies typically do things. I have had the benefit many people who have unselfishly helped. From my board of advisors, to supplier advisors, mentors, and many strong employees.

My first project that I would like to discuss is difficult, mostly because many people in the industry will know of this project. It was a commercial project that required us to support an existing retaining wall so that others could excavate below it for a future addition. In a large storm, while in a under excavated state before the additions were made, the wall collapsed. It was a million-dollar failure. Fortunately, no one was hurt including an elderly gentleman who rode it to the bottom of the collapse.

As most large-scale failures, it was a perfect storm of many converging factors including Engineering, weather, GC misunderstanding and communication, original workmanship, and property ownership instructions. However, it is our mistakes that I would like to highlight.

This was early in my career. We had done very little commercial work and relied on verbal communication and agreements. We were not asked to produce stamped engineered submittals. Had we done that we would have uncovered many of the flaws of the plan.

The main lesson I learned was the value of engineering processes. I learned the value of a registered professional engineer and the due diligence required on projects to get them right and the consequences to getting them wrong.