In Group and Blind Spot Bias 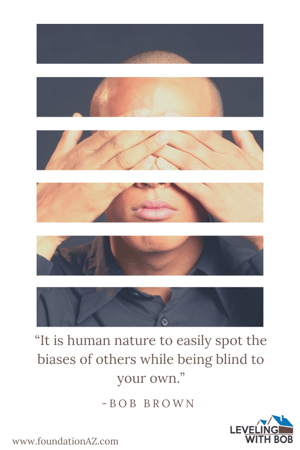 Blind Spot Bias basically follows the ‘New Testament’ observation of getting rid of the mote in your own eye in order to see clearly to remove the sliver from someone else’s eye. It is human nature to easily spot the biases of others while being blind to our own. This is easily magnified with another common bias, the In Group Bias. This is the tendency to look more favorably on the ideas of who we identify with as our “in group” common with nationalism, political parties, religions, clubs etc.

It’s not hard for one group in our company, say engineers, to give little credence to Production workers or Sales consultants or vise versa. We have found that good ideas and thought processes can come from anywhere. The more we include in an open minded way, the better results we seem to get for both us and our customers.

This is also a phenomenon seen around Arizona with various foundation repair “camps”. The foundation repair industry tends to revolve around various associations of contractors with engineers sometimes associated with geographical proximity. When particular engineers have a limited regular association with foundation repair contractors, they tend to fall victim to the in Group Bias defending those they become familiar with and vilifying those who are not in their camp. These self-reinforcing cycles of interactions of exacerbation tends to grow over time, similar to what happens in political or religious camps.

This In Group Bias is harder than normal to see, because the Blind Spot Bias that makes it easier to see the biases of others but occludes the very same biases in our selves.

What we can do:  Try to identify as the larger group or industry as opposed to smaller tribal units, be aware of these and take extra steps, taking considerable additional efforts to understand those not of our immediate tribe. In interacting with those outside of out typical tribal association, we must go out of our way to seek to understand.