Human beings…. all of us…can be victims to cognitive biases that can interfere with our understanding of a complex problem. There are a number of documented cognitive biases, basically mental shortcuts, that we often use to conserve mental energy…. That often result in errors in judgement. Humans have often used these heuristic shortcuts, because as hunter gathers we sometimes had to make life or death decisions quickly in order to not be eaten by a lion or bear in a time when there were few truly complex thinking requirements.

Today, however, in modern life there are many complex situations and few true emergencies that require fast decisions. Foundation investigations, interpretations, analysis, and conclusions are complex requiring us to look at multiple factors, with rules of thumb that sometimes are not always consistent. Using mental shortcuts will often lead us to the wrong conclusions. Therefore it is wise to be aware of all of these common human biases so that we can guard against them.

Over the next few blogs, I will share my observations of how some of these biases specifically have affected ours and others judgments and what can be done to help overcome them and have more consistent, accurate thinking in coming to better conclusions.

The first Bias we discuss is the Anchoring Bias

Basically, judging a book by its cover. This applies not just to people, but also to ideas. Sometimes, the first idea we form on a subject may not be the correct one.

I have been to many homes and in walking around and observing, form an opinion. Later when I get more information that shows that my first judgement was in error, I tend to stick to my original perception instead of giving equal consideration to information that comes later. This is especially true when the information comes in initially in a very visual impactful way such as seeing severe damage.

In scientific endeavors, when serious papers are written, or a thesis or dissertation is given, there is always critical peer review. This is a way to reduce errors from any one person falling in love with their original hypothesis and not seeing past their own Anchoring Bias.

Our process at Arizona Foundation Solutions is to ensure that multiple people review the evidence, assumptions and conclusions. This is an important reason why the foundation inspection and recommendations should never be done on the spot in one visit. Below is the floor survey on a recent foundation inspection.

Sometimes homeowners come to conclusions on their own or in discussion with others, some being more informed than others. Dissuading them of those initial conclusions can be difficult. 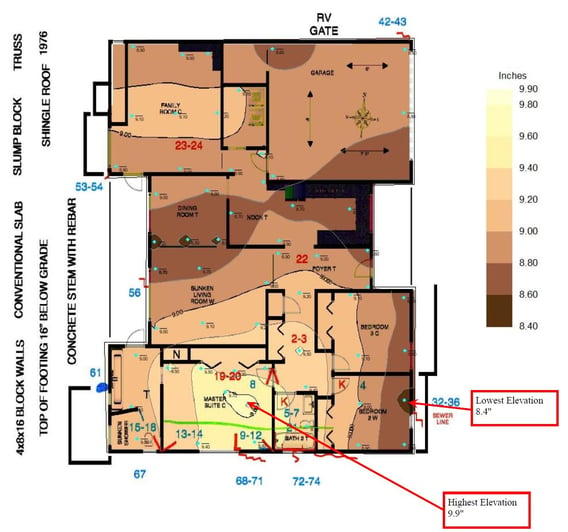 The green crack shown in the floor slab at the south side of the home had a significant elevation difference in elevation with the low side on the south, near the wall. Upon seeing this our tech on site, saw the damage and became completely convinced that the south (bottom) wall was settling. On further investigation there were some obvious signs that the initial perception was wrong. No gap at the baseboard, elevated interior walls, topo lines that don’t support that hypotheses, and many other important factors. Others looking at the data were able to see past that conclusion and dispassionately realize that other conclusions matched the data more accurately.

Peer review and critical thinking that minimizes anchoring biases can help us from making mistakes. It's an important clue It is what is missing in most foundation inspections from foundation repair contractors.